Thank you for your patience while we retrieve your images.

This was a lovely wedding which took place in Chelsea London.
The service took place at Chelsea Old Town Hall before going onto a private house in Chelsea for a traditional Malay ceremony.
Located on the famous King’s Road, Chelsea Old town Hall provides an ideal and charming backdrop for a wedding
Chelsea Old Town Hall is popular setting for civil marriage ceremonies and receptions.
Address: Chelsea Old Town Hall, King's Road, Kensington and Chelsea, London, SW3 5EE.
One of the best ways to understand traditional Malay culture is to participate in a Malay wedding, which is fascinating and steeped in age-old traditions. A Malay wedding begins with an akad nikah ceremony. The groom signs the marriage contract and agrees to provide the bride with a mas kahwin or dowry. The bride and groom will undergo many rituals such as the berinai besar ceremony where the fingers are painted with henna. On the day of the wedding, the groom arrives with his entourage of relatives and friends. He is accompanied by musicians beating the kompang (a percussion instrument) and followers carrying the bunga manggar or palm blossoms. As they arrive at the bride’s home, the entourage will be greeted with the sprinkling of yellow rice and scented water. Sometimes, performances such as pencak silat (the Malay martial arts) are held. Elderly representatives of the bride and groom engage in a custom called berbalas pantun, where poems made up of amusing verses are exchanged between the two parties. To add gaiety to the joyful affair, the groom and his party are sometimes required to overcome humorous obstacles before being allowed in. 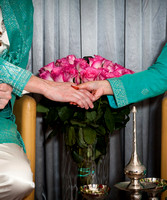